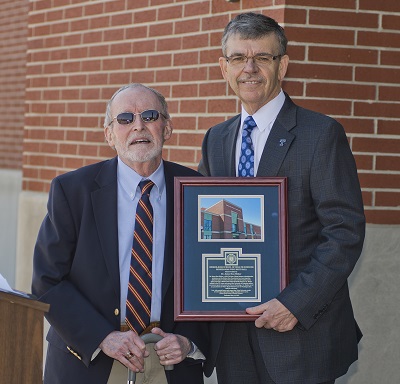 Trine University honored several donors who supported the Rinker-Ross School of Health Sciences and the 26,000-square-foot expansion of Best Hall of Science at a dedication ceremony outside the building Friday, May 12.

“It doesn’t matter which school you’re in,” Brooks said. “All of our students pass through this facility in some form.”

The Rinker-Ross School of Health Sciences was named in honor of retired Dr. James Ross Rinker of Binghamton, New York, a 1958 alumnus of the university who designated a $2.5 million estate gift toward the expansion.

“Dr. Rinker’s support, his dedication, his generosity helps to ensure we have a first-class learning environment to support all of the students of Trine University,” said Brooks.

“I took a brief tour through the laboratories and I was very impressed,” said Rinker. “I’m sure that we’ll produce some wonderful students and earn a reputation as an outstanding school throughout the United States.”

The dedication came two days after the university learned its Doctor of Physical Therapy program, which is part of the Rinker-Ross School of Health Sciences, was accredited by the Commission on Accreditation in Physical Therapy Education (CAPTE).

Drs. Rick L. and Vicki L. James of Auburn also were recognized for their support of the project. Rick James is a 1977 business administration graduate from Trine and chairs the university’s board of trustees.

“There’s no way to appropriately reach the magnitude of thanks to Rick and Vicki for their leadership for their generosity and for their commitment to the success of Trine University to our students and to this community,” said Brooks. “There’s not a corner of our campus or a project in recent years that hasn’t benefitted or progressed due to their incredible generosity.”

The following dedications were made in honor of those who supported the project:

The Best Hall addition is part of Trine University’s Invest in Excellence campaign, which was expanded last year with the goal of raising $125 million for scholarships and campus improvements as well as the endowment. Launched in 2009, the campaign has raised nearly $88 million, about 70 percent of the final goal.

Photo: Trine University President Earl D. Brooks II, Ph.D., right, presents a plaque to Dr. James Ross Rinker in honor of Rinker's support of the Best Hall expansion and the Rinker-Ross School of Health Sciences. Rinker is a 1958 alumnus of the university. (Photo by Dean Orewiler)