Turner honored as Woman of Distinction 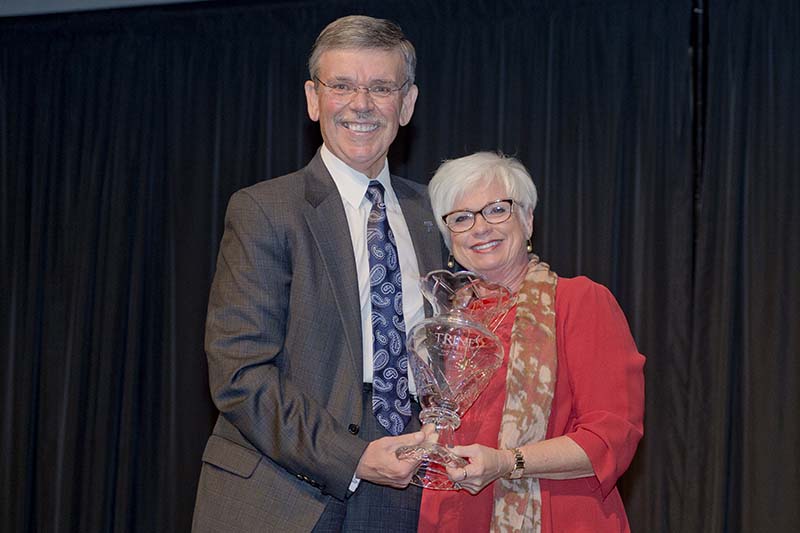 A longtime supporter of Trine University and former Miss Steuben County was honored with the Woman of Distinction Award from Trine University during its Touchstone and Homecoming Celebration Dinner on Friday, Sept. 15.

Cindy Lou Turner received the award after more than 370 guests enjoyed a video presentation featuring images from throughout her lifetime.

“We are honored to know you, Cindy, and awe at the grace and generosity you provide to our community, to your church, and to those in need,” said Earl D. Brooks II, Ph.D., Trine University president. “You truly exemplify a woman of faith, courage, humility, praise and prayer, and we are all blessed to know you.”

Born in Coldwater, Michigan, and raised in Orland, the youngest of five children, Turner established herself as a well-rounded woman early on. While winning blue ribbons at state level competitions for dress review, she worked in her father’s and grandfather’s supermarket, drug store and sporting goods shop. As a young girl she played volleyball and saxophone in the marching band and was a first-string majorette baton twirler. After graduating early from Prairie Heights High School, she accompanied her parents to Europe. She worked for the U.S. Embassy in Bonn, Germany, in the Library Services department, and taught religious education to the children of embassy personnel.

After being in Europe for a year, Turner returned home to Angola and became Miss Steuben County 1975.

Turner worked at the Elmhurst Hospital in Angola, putting herself through beauty school to become a licensed cosmetologist. While working at the hospital she admitted a Tri-State University engineering senior named Keith Turner, whom she dated and eventually married at their home parish of St. Anthony’s Catholic Church in Angola. Keith graduated from Tri-State, now Trine University, in 1976 and serves on the university’s board of trustees.

While raising three sons, Cindy was heavily involved in pageantry – serving as a judge and coach – having completed modeling training, worked for a South Bend modeling agency and accepted commercial modeling jobs for several Midwestern companies.

For the last 28 years she has taught religious education and First Communion classes. She and her husband, Keith, have a special devotion to the Blessed Mother and have made several faith-enriching pilgrimages.

For five years Cindy volunteered with the Saints Alive! Organization of Bishop Dwenger Catholic High School, chairing the organization for the final two years of her tenure. She serves on the Steuben County YMCA Board of Directors and is a member of the Christ Child Society of Fort Wayne. Recognizing the need for a pregnancy resource in this region, she was instrumental in bringing a Women’s Care Center to northeast Indiana.

Cindy and Keith Turner have supported Trine University in various ways including the Scholarship Fund and multiple capital projects, such as the Parkview/SportOne Softball Field, Scholarship Golf outings and the Scholarship Gala. They provided funding for the Keith M. and Cindy L. Turner Mobility Rehabilitation Laboratory in the Rinker-Ross School of Health Sciences in Best Hall and have pledged generous support to the MTI Center, scheduled to open in January.