Trine University inducted three individuals and two teams into its Athletic Hall of Fame during the university’s annual Touchstone and Homecoming Celebration Dinner on Oct. 5. 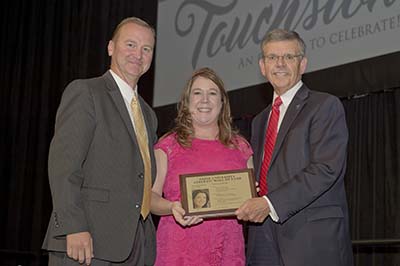 The most decorated women’s golfer in university history, Molly (Weissert) Duvall was a medalist in many tournaments and earned NAIA All-American honors in 1999, 2000 and 2002, and NAIA All-American Honorable Mention in 2001. Her senior year, she shot a 76 in the final round of the NAIA Women’s Golf Championship, tying for the best round of the day and for 10th overall in the tournament. She also excelled in the classroom, receiving the Dean’s and SanGiacomo scholarships, and served as president of the Kappa Sigma Alpha sorority, a student advisory board member, and a mentor. She graduated in 2002 with a degree in golf management and marketing, and today lives with her husband Brian in Indio, California, working as a sales executive for Marriott International. 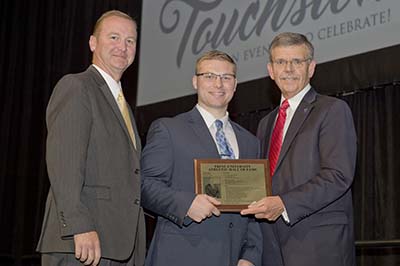 Elias Larson, competing at 157 pounds, left Trine University as the most decorated wrestler in its history, earning NCAA Division III All-American honors along with many other awards from 2011 through 2013. The two-year captain was ranked No. 1 nationally in his weight class and finished in the top 10 nationally for most pins in Division III in 2012. Larson holds Trine University records for most wins overall and in a season, and is among the top five in several other categories. He graduated cum laude in 2013 with a mechanical engineering degree and currently resides in Orland Park, Illinois, working as a patent attorney for Lempia Summerfield Katz, LLC. 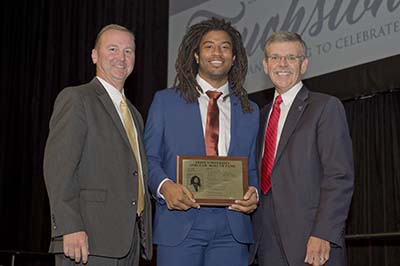 A dynamic threat on each end of the basketball court, Ian Jackson was a three-time first team all-conference selection. In 2013, he earned 3rd Team all-American Honors and MIAA Conference MVP, and was conference player of the week seven times over his career. His top-ten records for Trine men’s basketball include sixth in points, fourth in scoring average, fifth in field goals attempted, sixth in field goals made and fourth in most games started. He also holds seventh place in MIAA career scoring in MIAA contests. Off the field, he was a member of Trine’s Multicultural Student Organization. The 2013 business graduate currently resides in Burbank, California, and is a partner in his family’s entertainment business as well as a personal fitness trainer.

During the 1996-97 season, the Tri-State women’s basketball team had one of the most successful runs in program history. Finishing 24-6, the team earned a conference championship and conference tournament championship. Going all the way to the Sweet 16, the team ranked as high as fourth in the country. Team members received national awards including two NAIA All-Americans, the NAIA National Leadership Award winner, three NAIA Scholar Athletes, and WBCA-NAIA National Coach of the Year.  Conference honors included five Academic All-Conference players, Coach of the Year, two All-Conference players and one player named to the All-Conference Defensive Team. This talented team consisted of four 1,000 career point scorers, and many individuals in Trine University’s women’s basketball record books. 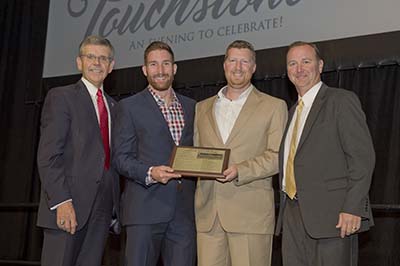