This year’s total is the highest amount ever raised through BMOC, and was achieved through two weeks of activities that ended with a pageant on Feb. 16. The event was extended a week after the original Pageant Night on Feb. 9 was postponed due to weather.

“BMOC 2018 could not have gone better. The support and generosity we received in the week leading up to and at the event was truly humbling,” said Brittani Smith, a biomedical engineering major from Indianapolis who serves as vice president of Theta Phi Alpha and chair of BMOC. “I could not have pulled this off without the help of all 44 of my sisters. This is one event that we all rally behind and are extremely passionate about. We love seeing the impact we can make, even in small-town Angola.”

Eight male students competed in this year’s BMOC event. Tylor Willms, a senior sport and recreation major from Fremont, Indiana, came in first; Ben Moricz, a senior mechanical engineering major from Valparaiso, Indiana, came in second; and Tyler Wang, a junior exercise science major from Kentland, Indiana, came in third. Moricz also was named Mr. Pink Ribbon, which recognizes the contestant chosen by the other competitors for showing the most enthusiasm and sportsmanship.

Penny Wars made up 20 percent of contestants’ overall scores and took place during the two weeks leading up the pageant. For this event, each contestant decorated a jug and tried to get it filled with as much money as possible. This year, Penny Wars raised a total of $3,270 toward the total.

War Night, which took place on Feb. 16, also counted for 20 percent of the final score. This event required contestants to gather four friends and participate in a series of games and obstacles, including an obstacle course, a dizzy bat race, a three-legged race, team jump rope and tug of war.

Pageant Night made up the final 60 percent of the scores. This event included talent, What BMOC Means to Me, pick-up line, dress like your hero, and Q&A.

At the beginning of the pageant, Lynda Houk, executive director of the Vera Bradley Foundation, gave a short speech, sharing where money donated to the foundation goes. The foundation supports a current project at the Melvin and Bren IU Simon Cancer Center to create a targeted treatment using a monogram medicine that looks at the DNA of the cancer and patient.

“This was her first year at the event, and we were so happy to have her,” stated Smith, “She helped bring focus to the impact we are truly making with this event.”

From left, Brittani Smith, chair for BMOC, announces the total amount of money raised as Tylor Willms, Ben Moricz and Tyler Wang wait behind her. 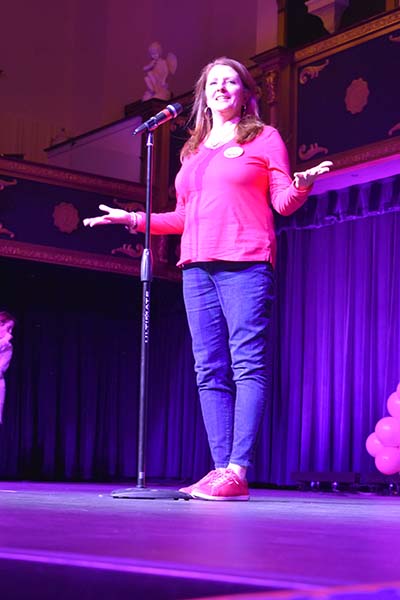 Lynda Houk, executive director of the Vera Bradley Foundation, talks about the foundation and the research projects it supports during the BMOC pageant. 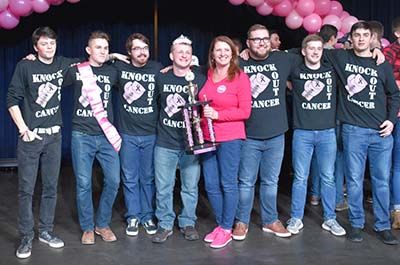 The sisters of Theta Phi Alpha join arms at the conclusion of the pageant. 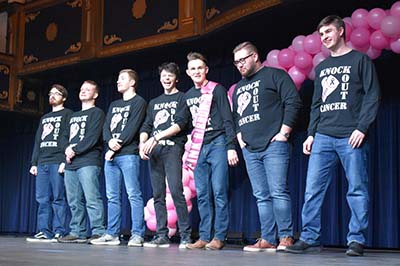