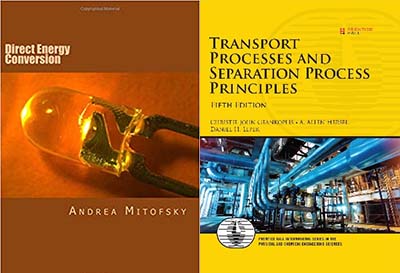 “Direct Energy Conversion” was written by Andrea Mitofsky, Ph.D., associate professor in the Department of Electrical and Computer Engineering. The peer-reviewed book discusses the physics behind energy conversion processes as well as different types of energy conversion devices. It is targeted toward junior-level electrical engineering students, as well as scientists and engineers who are interested in the topic.

Mitofsky wrote the text for a class she has taught since 2012.

“Steve Carr (Ph.D., associate professor) has taught a class on motors and generators for multiple years. However, we didn't have a course on other types of energy conversion devices such as batteries, piezoelectric devices and solar cells, so I thought that would be a good topic,” she said. “I couldn't find a good textbook to use. Books were aimed at graduate students, written decades ago, and out of print. However, I was able to find plenty of reference material to use. I decided at that time to write my own text, since I didn't see one available.”

The book can be downloaded as a free PDF at trine.edu/books/directenergy.aspx, or purchased at Amazon.com.

A. Allen Hersel, Ph.D., dean of the Allen School of Engineering and Technology, is co-author of the new fifth edition of “Transport Processes and Separation Process Principles,” a popular chemical engineering textbook. Christie Geankoplis, the original author, died in 2005, two years after the fourth edition was released.

Prentice Hall, publisher of the book, asked Hersel to update the book. He enlisted Daniel H. Lepek, Ph.D., associate professor of chemical engineering at The Cooper Union, to update the fluid dynamics section.

“We completely revised the book from 14 chapters to 33 chapters to make it more readable for students,” Hersel said. “We also included new chapter objectives and summaries throughout, better linkages between coverage of heat and mass transfer, and more coverage on heat exchanger design, and we have added a website hosted at trine.edu.”

The text can be used for courses in fluid dynamics, heat transfer, mass transfer, and separations.

More information about both texts is available at trine.edu/books.