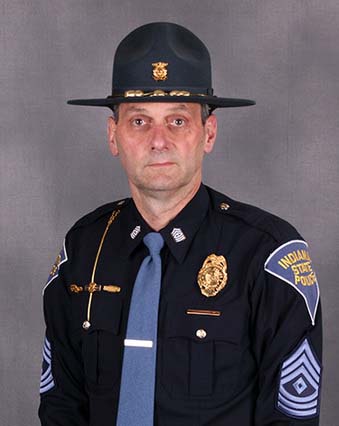 Smith is an adjunct professor in the Department of Criminal Justice at Trine University.

Smith has been transferred to serve in the Enforcement Division. He will serve as the Commander for Area II which comprises the Indiana State Police Districts in Bremen, Fort Wayne and the Toll Road.  He will oversee the field operations for the enforcement personnel and command staff in those districts.

Smith is a native of Syracuse, Indiana, and a 1983 graduate of Wawasee High School.  On Dec. 19, 1987 he graduated from the 45th Indiana State Police Recruit Academy as a trooper and was assigned to the Toll Road Post, where he spent three years working LaGrange and Steuben Counties.

In 1990, Smith transferred to the Fort Wayne Post and was assigned patrol duties in Steuben County.  He transferred to the Laboratory Division in 1995, where he served as a Crime Scene Technician for two years, and in 1996, earned a bachelor's degree in criminal justice from Indiana University Purdue University Indianapolis (IUPUI).  In 2005, he was transferred to the Criminal Investigation Division, where he served as a detective until his promotion to sergeant in November 2015, which had him overseeing the day-to-day investigative duties of seven detectives assigned to the Fort Wayne Post.

In February 2016, Smith was promoted to the rank of first sergeant, where he served as the District Investigative Commander.  He supervised the Investigative Squad Leader and served as a liaison between criminal justice agencies within the district, identifying crime problems and action plans, and reviewing criminal case and incident reports generated by troopers and detectives from the Fort Wayne post.

During his career, Smith has served as a Field Training Officer, a member of the Tactical Intervention Platoon and, in October 2015, he was awarded the department’s Meritorious Service Award for his investigative efforts into a “cold case” homicide from 1989 in which the suspect was ultimately located in Bangladesh and finally arrested in India. The suspect, Mahfuz Huq, was extradited back to Indiana in 2013 and pleaded guilty to manslaughter that following November.  He was also awarded the Meritorious Service Award in October 2018 for his work in the 1988 April Tinsley homicide case, which was solved in July 2018, 30 years after the crime was committed. Smith and his family are Steuben County residents.