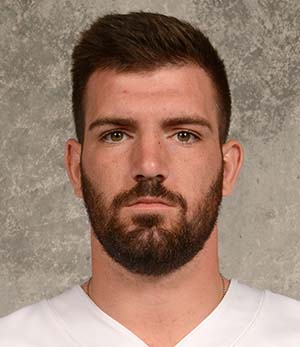 While many students find college to be a balancing act, Damon Munn has more to balance than most.

Like suddenly being called to duty to help protect the President of the United States.

Munn, a Trine University senior, has also been a member of the 122nd Air National Guard in Fort Wayne since 2016. A Security Forces officer, one of his recent duties was serving as part of the security detail when President Donald Trump visited Fort Wayne on Nov. 5.

“My assignment was to be a blocking force for the main entry controller point and to visualize any threat coming from the north, west and/or east,” the Franklin, Indiana, native said. “I felt honored to be able to be on this detail. I found out just a few days before it all happened.”

When not on special assignment, Munn said he typically serves one weekend per month, plus two full weeks of training each summer. His usual duties include serving as an entry controller and/or part of patrol.

Fall is the busiest, since Munn also plays tight end for Trine’s football team. He has excelled in that role as well, scoring three touchdowns so far this season. He said keeps in regular communication with his supervisors, professors and coaches to make his schedule work.

“I usually just work (in the National Guard) the Sunday after the game and make up the day the following Monday,” he said.

A criminal justice major, Munn said his National Guard service helps provide real-world context for what he is learning in his classes at Trine. He originally enlisted in hopes that his Guard service would help prepare him for a law enforcement career as well as pay for college.

Once he graduates in May, he hopes to begin working in law enforcement and start working on a master’s degree in criminal justice. He also plans to stay in the Guard as long as possible.

Top photo: Damon Munn stands in front of Air Force One in Fort Wayne on Nov. 5.