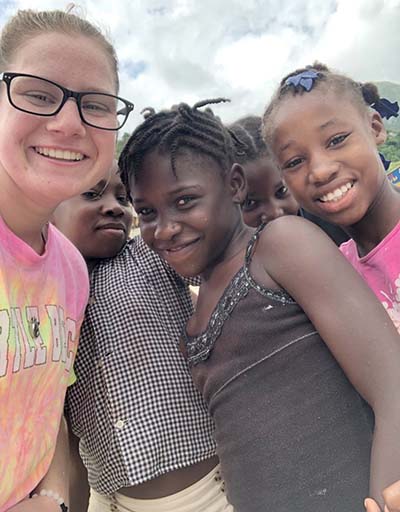 PEREDO, Haiti — Though not during Spring Break as originally planned, a mission trip by the Christian Campus House (CCH) at Trine University still impacted those who served and were served.

Seven Trine students and CCH staff member Jessica Allen BSBA 2016 traveled to Haiti from May 11-18 to work with Haitian Christian Outreach. The trip had been postponed due to political unrest in the country in March.

“Thankfully, the entire team was available to still go on the new dates,” said Allen. “We did have to raise some additional funds to cover some costs associated with cancelling and purchasing new tickets.”

The team’s typical day began with breakfast at 8 a.m., then working through the morning and afternoon with a half-hour break for lunch. Members spent time together and with local children in the evenings.

“Most nights we would play cards or hang out with the kids,” said Lydia MacGilvray, a junior majoring in marketing. “There was a gazebo outside where we stayed, so we also spent a lot of time there just laughing and hanging out.”

Much of the group’s work involved helping build an enclosure and cages for a small rabbit farm the ministry will use to help people start their own rabbit farms.

“We learned that rabbits are a cost-effective source of food and income, and a rabbit farm is much more sustainable than a chicken farm,” Allen said.

The group also assisted with sanding and painting a truck HCO uses to transport people and supplies. Members also traveled with HCO’s child sponsorship coordinator to gather updated information and photos from children to send to sponsors in the United States.

MacGilvray said she went on the trip “to step outside my comfort zone and share the word of God.”

“I also wanted to see how another culture does things, church-wise,” she said. “It was a big decision for me, but I am so thankful I decided to go.” 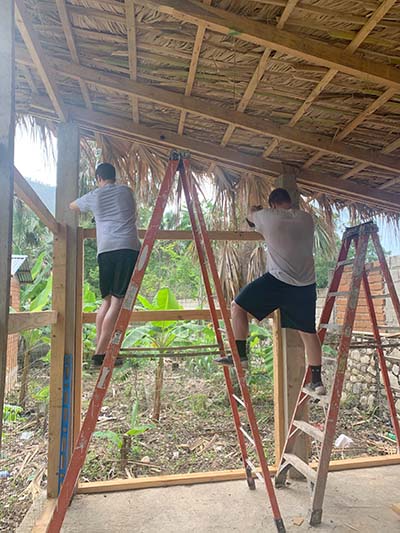 Mason McFarland, a finance major who graduated with the Class of 2019, said the trip offered him the opportunity to help people while expanding his horizons.

“Although the majority of the people spoke very little English, they were extremely friendly and happy to help in any way possible,” he said. “I also really enjoyed taking a trip to two schools in the mountains to spend some time with the kids there.”

The team members said being immersed in a different culture had a big impact on them.

“The way that people live in Haiti is very different from what we are used to seeing in America, and is pretty eye-opening,” Allen said.

“You go to a place like Haiti and you realize all we complain about is nothing compared to what most of the world has to deal with,” said McFarland.

Group members especially enjoyed interacting with children throughout the trip.

“My favorite part was anytime we saw kids and they instantly smiled and were so happy to see us,” MacGilvray agreed. “We had kids run up to us and hug us, and it filled me with joy.”

Team members said they also bonded together through the experience.

“We shared lots of laughs and it was amazing to see so many different people connect over one thing, the love of God,” MacGilvray said.

“I loved being able to work with an organization that is bringing God’s light to people,” said McFarland. “It was the best mission trip I’ve been on and it was a truly life-changing experience.”