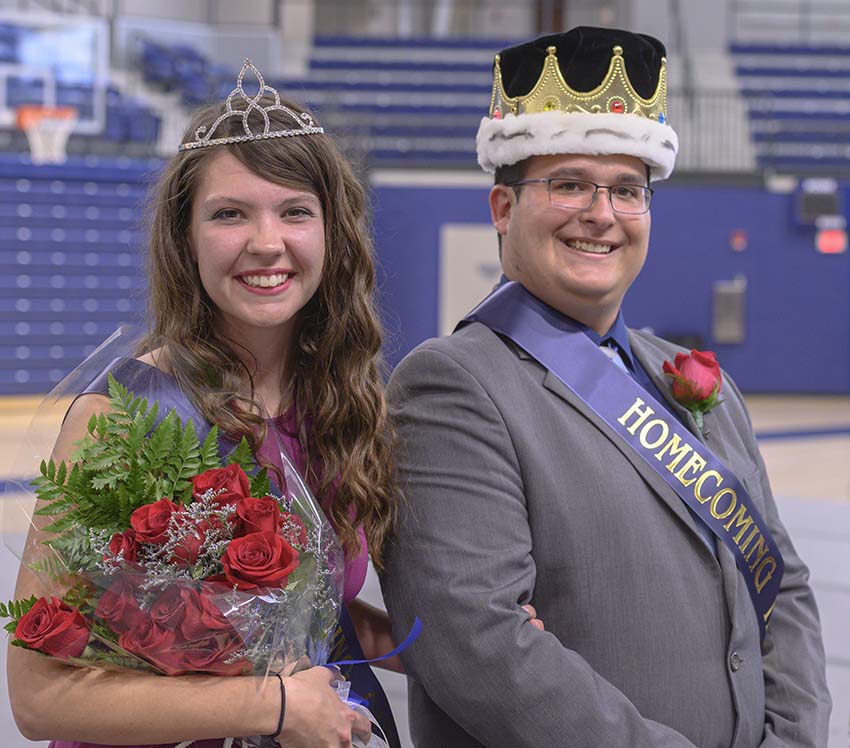 Trine University recognized its 2019 Homecoming court as well as its king and queen during the annual Thunderstruck Pep Rally in the MTI Center on Oct. 4.

Evan Radtke of Sturgis, Michigan, was named Homecoming king. Radtke is a junior majoring in forensic science, and is involved in marching band, pep band, concert band and Sigma Alpha Phi. He would like to work in a crime lab in Grand Rapids.

Other members of the Homecoming court included:

Sybil Kurian of Elkhart, Indiana, a junior majoring in exercise science, pre-Doctor of Physical Therapy. She is involved as vice president of the Study Abroad Club, historian of Kappa Sigma Alpha sorority, SOAR orientation leader, and member of the Student Activities Board of the Multicultural Student Organization, a member of the Student Foundation, a member of the Health and Science Association, and a Convocation partner. She would live to travel and practice physical therapy, and to be a physical therapist at a veteran’s hospital.

Sandeeb Kurian of Elkhart, Indiana, a senior majoring in design engineering technology with a pre-med track. He is involved in Skull and Bones, Inter Fraternity Council, Alpha Sigma Phi, Study Abroad Club, Engineers Without Borders, Multicultural Student Organization, and SOAR Orientation. He wants to work as an orthopedic surgeon, then earn a master’s in business administration and start an orthopedic component company.

Abby Kuhlman of Napoleon, Ohio, a senior majoring in exercise science, pre-Doctor of Physical Therapy. She is involved in Christian Campus House, serves as a trainer, is a representative for Trine Christian Athletes, is secretary for American Heroes, serves as a resident assistant and is part of the National Society of Leadership and Success. She would like to become a physical therapist and help people achieve their fitness goals by becoming a personal trainer.

Vincent Hulme of Lake Worth, Florida, a senior majoring in finance. He is involved in Trine football and the Ketner School of Business Ehinger Fellows. He would like to work in investment banking, specifically with corporate mergers and acquisitions.

Kammie McGreal of Greenfield, Indiana, a junior majoring in biology, pre-med. She is involved as a resident assistant, vice president of Tri Beta and a volunteer for Special Olympics, and is a member of the National Society of Leadership and Success, Theta Phi Alpha, Trine Christian Athletes and the American Heroes Organization. She would like to earn a doctoral degree in dentistry and become an orthodontist or oral surgeon.

Jason Clune of Meadville, Pennsylvania, a senior majoring in elementary education. He is involved in the Student Advisory Athletic Committee, basketball team and as a resident director, and would like to become a college basketball coach.

Melissa Wirtz of Huron, Ohio, a junior majoring in design engineering technology. She is involved in band, Gamma Phi Epsilon, and the American Society of Civil Engineers, and would like to work in the automotive industry.

Nicolas Ricci of Crown Point, Indiana, a senior majoring in chemical engineering. He is involved in Trine baseball, the American Institute of Chemical Engineering and Omega Chi Epsilon, and would like to own an engineering plant.