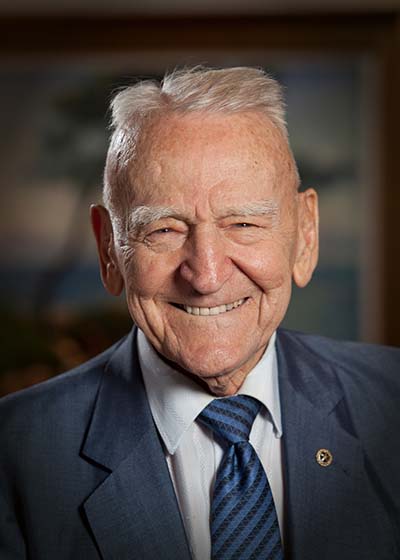 Trine University is mourning the death of distinguished alumnus, supporter and longtime Board of Trustees member Dr. John J. McKetta Jr. on Jan. 15. He was 103.

“Dr. McKetta had a profound impact on Trine University, the chemical engineering profession and the nation as a whole,” said Earl D. Brooks II, Ph.D., Trine University president. “His expertise and contributions to society, as well as his care for many engineering students and unique sense of humor, touched countless lives. He will be greatly missed.”

Known to many on campus and elsewhere as “Johnny,” Dr. McKetta was born Oct. 17, 1915, in the coal mining hamlet of Wyano, Pennsylvania. After graduating from high school, he worked two years in the coal mines while writing to more than 50 universities to pursue chemical engineering. He heard back from what was then Tri-State College, which he described as a “little school in Indiana I read about in Popular Mechanics magazine.”

Dr. McKetta graduated from Tri-State with a chemical engineering degree in 1937. He remained an avid supporter of Tri-State and later Trine, serving as a member of the Board of Trustees from 1957 until 2011, when he was named trustee emeritus as the longest-serving board member in the university’s history.

“Johnny McKetta’s service to Trine University is unparalleled,” said Dr. Rick L. James, chair of the Trine University Board of Trustees. “We are grateful for his leadership and support through so many decades of growth and transition. He played an instrumental part in the development of the beautiful, thriving university we enjoy today.”

In 1988, Dr. McKetta established the McKetta Teaching Awards at Trine University. Given annually to 10 recipients across various schools, 310 awards have been given to 279 recipients as of May 2018, totaling more than $1 million in gifts to the faculty.

He received an honorary doctorate from Trine in 1967, when he also was named a distinguished alumnus. In 2001, Dr. McKetta was given Trine’s highest honor, the Pillar of Success Award, recognizing his many achievements and accomplishments, leadership, service, philanthropy and commitment to his community. Trine’s Dr. John J. McKetta Jr. Department of Chemical and Bioprocess Engineering is named in his honor.

In 2016, the Trine University faculty issued a proclamation to name Dr. McKetta the “patron saint of the faculty” in honor of his dedication to his alma mater and his support of the faculty during his time as a trustee.

After graduating from Tri-State, Dr. McKetta earned his B.S.E., M.S. and Ph.D. in chemical engineering at the University of Michigan. While there, he married Helen Elisabeth Smith McKetta, nicknamed “Pinky,” on his birthday in 1943.

In 1946, he joined the faculty at University of Texas, where he later became vice chancellor of the UT system and dean of the College of Engineering. He remained at UT until retiring in 1995.

In his long career, he served as one of the world’s foremost energy experts. An authority on thermodynamic properties of hydrocarbons, he served as an energy advisor to U.S. Presidents Richard M. Nixon, Gerald R. Ford, Ronald Reagan and George H.W. Bush.

His peers elected him president of the American Institute of Chemical Engineers (AIChE) in 1962. His professional honors include the Lamme Award as the best engineering professor in the United States in 1976, the International Chemical Engineering Award as the top chemical engineer in the world in 1981, and the Herbert Hoover Award in 1989 for his service to society.

In 2013, UT’s Texas Exes named Dr. McKetta first on its list of the Top 10 Best and Most Inspiring Professors. In honor of his 100th birthday in 2015, thousands of his former students raised more than $25 million to celebrate his contributions to their lives and to chemical engineering at the University of Texas at Austin, which rechristened his home department the John J. McKetta Jr. Department of Chemical Engineering. That same year, the AIChE’s Cumulative Giving Society was renamed the John J. McKetta Jr. AIChE Lifetime Giving Society in his honor.

Dr. McKetta was preceded in death by his beloved Pinky and their daughter Mary Anne. He is survived by his children Charles William “Charley” McKetta and Kreta Johnson of Moscow, Idaho; John J. “Mike” McKetta III and Sallie Martin Sharp of Austin; and R. A. “Randy” and Terry Monroe McKetta of Lakeway, Texas; as well as many grandchildren and great-grandchildren.

A memorial service is planned Feb. 9 at the University of Texas. Memorial gifts may be directed to Trine University’s Dr. John J. McKetta Jr. Department of Chemical & Bioprocess Engineering. An obituary and memorial guestbook will be available online at wcfish.com.