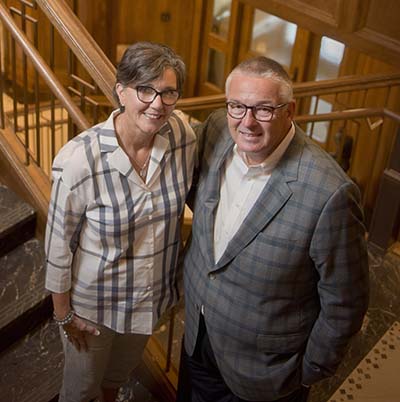 Known for their leadership and support of community efforts throughout northeast Indiana, the Auburn couple will be one of two recipients of Lifetime Achievement awards. They were nominated for the honor by Trine University.

“Trine University and northeast Indiana have been blessed beyond measure through the generosity of Dr. Rick and Vicki James,” said Earl D. Brooks II, Ph.D., Trine University president. “Their leadership has not only been a key factor in multiple efforts to improve the quality of place and quality of life in this region, but has inspired many others to provide philanthropic support.”

Rick James, a 1977 business administration graduate from Tri-State University, now Trine, serves as chairman of Metal Technologies Inc. (MTI), a company he co-founded. MTI employs 1,127 individuals, of which 378 are in in Indiana.

Rick serves as chairman of Trine’s Board of Trustees, of which he has been a member since 2010.

Trine’s University Center was named in honor of Rick and Vicki James in May 2012. They provide annual support to the Trine Fund and have financially supported The Metal Technologies Inc. Health and Fitness Center in Fred Zollner Athletic Stadium, a stadium suite in the Athletic Stadium and a flagpole near the football field, an additional house for use by Campus Christian House, the Jim and Joan Bock Center for Innovation and Biomedical Engineering, the T. Furth Center for Performing Arts, the Ford Hall renovation, Reiners Residence Hall, the expansion of Best Hall, the Thunder Ice Arena and MTI Center, the Fawick Hall expansion, and creation of the Books and Beyond Scholarship.

Rick serves on the board of directors for the Foundry Educational Foundation, which provides scholarship support to promising individuals who desire to enter the foundry industry, and has been named to the Board of Directors of the American Foundry Association.

Vicki serves in multiple roles at Auburn First United Methodist Church and has served on the Board of Directors for PBS-39 TV in Fort Wayne and RISE, Inc.

They also have led and contributed to several revitalization efforts in Auburn, including a 100-acre public park, a public arts and culture square, and acquiring and renovating selected buildings to enhance and preserve the historical character of the downtown area and encourage private investment by others.

The couple also supports the Flight 93 Memorial in Pennsylvania, the Fellowship of Christian Athletes and United Theological Seminary.

Hosted by the Association of Fundraising Professionals – Indiana Chapter, the Indiana Philanthropy Awards celebration, welcoming fundraising professionals throughout the state, will take place Thursday, Nov. 14, at the Indiana Roof Ballroom. A networking reception begins at 11:30 a.m., followed by a luncheon and awards presentation at noon.

Since 1983, Indiana Philanthropy Awards have honored individuals and organizations who have enhanced philanthropy, the community, and the world through their dedicated efforts, time, leadership, passion, and generosity in Indiana. Past honorees have included some of the foremost philanthropists, leaders, organizations, and corporations in Indiana who have left an indelible mark on communities across the state and beyond.

In addition to the Dr. Rick and Vicki James, the following individuals, corporations and organizations will be honored:

Nominated by Eskenazi Health Foundation Board of Directors and Thompson District

Nominated by The Community Foundation of Muncie & Delaware County

The Association of Fundraising Professionals-Indiana Chapter (AFP-IC) is a network of 375 professional fundraisers and service providers in central Indiana, all working on behalf of important nonprofit causes in our community.

The Association of Fundraising Professionals (AFP) is the leading organization for professionalism in fundraising and has helped thousands of fundraisers to efficiently and ethically raise philanthropic dollars by increasing their fundraising skills and knowledge. Since 1960, AFP has inspired global change and supported efforts that generated over $1 trillion. AFP’s nearly 30,000 individual and organizational members raise over $100 billion annually, equivalent to one-third of all charitable giving in North America and millions more around the world.