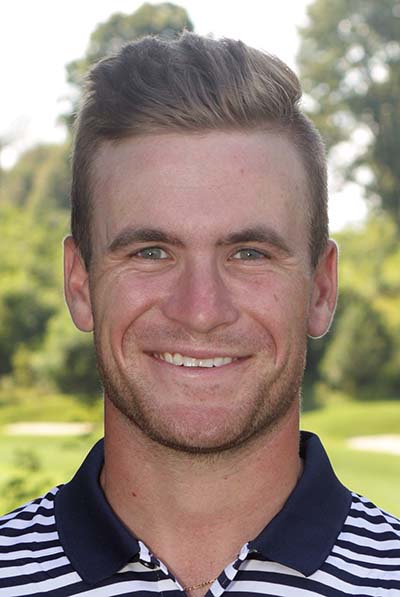 Trine University senior men's golfer Grant Brettnacher (Lafayette, Indiana/Harrison) has been named the recipient of the Trine Robert L. Greim Award, given to the best male athlete as voted by the Thunder Athletic Department.

Brettnacher had a standout fall season and helped lead Trine to its first MIAA Team Championship.  In addition, Brettnacher finished as the individual champion in the conference championship and averaged 72.3 strokes per round in six MIAA events.  He was tabbed the conference's "Most Valuable Golfer" as well as earning the MIAA Sportsmanship Award, becoming the first player to earn both honors in the same year in MIAA history.

Overall for the season, Brettnacher averaged 72.60 strokes per round (10 total rounds) and placed in the top-five in five of the team's seven total events. He also finished runner-up or better in four of those events. Brettnacher's season-low round of 68 came in the first round of the MIAA Fall Final. He had four rounds of par or better during the year and nine of 10 rounds below a score of 75 strokes.

To go along with his "Most Valuable Golfer" and Sportsmanship Award honors, Brettnacher earned first-team All-MIAA recognition and became a three-time All-Conference honoree in his career (earned second-team honors twice).  He was one of four Trine players to earn first-team accolades this past fall on the seven-person team.

Brettnacher is graduating from Trine with a degree in golf management and marketing.