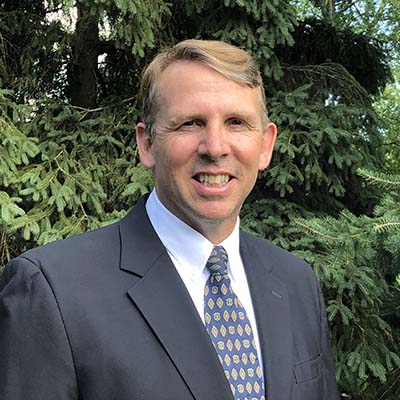 Len Haidl was able to live out his dream of being a fighter pilot during more than a quarter-century in the U.S. Navy.

As an adjunct faculty member in Trine University’s MBA program, he hopes to help others live out theirs.

“I truly enjoy helping others become better versions of themselves,” he said.

His passion for taking to the air began as a boy, when he was able to fly once a month in a light civil aircraft with his father.

“Flying provided us with the opportunity to bond as father and son,” he recalled.

“In the early 1980s, the Navy F-14 Tomcat flew in that airshow and I heard another father tell his son that one could make a career of flying an airplane like that,” he said. “That piqued my interest — I was 10 or 11 at the time.”

His father also instilled a sense of obligation to serve in the military. Then, in 1985, the movie Top Gun debuted in theaters.

“Combine a love of flying, a desire to serve in the military and a ‘rock star’ movie about flying, and it all added up to my wanting to fly jets in the Navy,” he said.

He served as a member of the Naval Reserve Officers’ Training Corps (ROTC) unit at the University of Michigan while attending Eastern Michigan University. In 1992, he commissioned as an officer in the U.S. Navy and reported to Naval Air Station Pensacola, Florida, for initial pilot training.

He was selected to fly an E-2C Hawkeye early warning aircraft and deployed on the USS George Washington in 1996, supporting operations near Sarajevo and in the Persian Gulf. A year later, he was offered the opportunity to transition to the F-14 Tomcat.

“I jumped at the chance to fly the plane of my boyhood dreams,” he said.

His service as an F-14 pilot included stints with:

The Navy then retired the F-14 Tomcat and transitioned pilots to the F/A-18 Super Hornet. Haidl’s experience with that aircraft included serving as training officer and instructor pilot with the Romans of VFA-106 in Virginia Beach, and as operations officer for Carrier Air Wing 3 about the USS Harry S Truman, supporting combat operations in Iraq.

Though he was done flying fighter aircraft, he continued another decade of distinguished service in the Navy. He attended the Industrial College of the Armed Forces in Washington, D.C., studying the U.S. manufacturing base and the national security implications of the U.S. dollar. After graduating in 2010, he served with the Joint Improvised Explosive Device Defeat Organization (JIEDDO) in Washington, D.C., leading civilian and military personnel charged with finding, developing and fielding technological solutions to lessen the danger of improvised explosive devices (IEDs).

Three years later, he was assigned to the National Defense University, where he served as deputy director of the Wargaming Division within the Center for Applied Strategic Learning and as an adjunct professor for the "Human Dimensions of Leadership" course. In 2015, he reported to the University of Michigan to serve as executive officer of the NROTC Unit, the same unit he attended as an undergraduate.

In addition to his work with the NROTC, he taught an undergraduate Leadership and Management course at UM that received recognition from students as a Golden Apple Award nominee.

Retiring from the Navy in 2019, Haidl returned to the cockpit, flying for PSA Airlines, a wholly owned subsidiary of American Airlines. However, after a year, he decided his passions were elsewhere.

“Whether it was as a flight instructor, teaching at the National Defense University or at the University of Michigan, I have enjoyed teaching and being there for the ‘aha’ moment,” he said.

He said he appreciates the encouragement he received from Regina Schinker, Ph.D., director of instructional development for TrineOnline, to teach. His focus in Trine’s MBA program will be on leadership and business ethics.

“At the end of eight weeks, I trust that my students will have the confidence to ask ‘why,’ to challenge assumptions, and to view problems and potential solutions through multiple lenses,” he said.