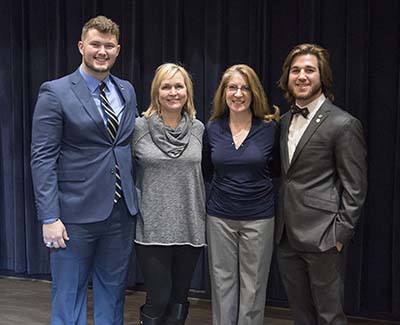 Piazza and Gruver both died as a result of hazing incidents in 2017, Piazza at Penn State University and Gruver at Louisiana State. After hearing their mothers, Evelyn Piazza and Rae Ann Gruver, speak at national SigEp events, Schuttler and Ricky Davila, chapter president, spearheaded an effort to bring Evelyn and Rae Ann to the Trine University campus.

That effort culminated in the “Love, Mom and Dad” event held Jan. 29 in the T. Furth Center for Performing Arts, attended by more than 600 Trine students, including all involved in Greek life, plus members of the community.

“When hazing and alcohol abuse are prevalent, the consequences can be tragic, and these parents paid the ultimate price,” Davila said in introducing the pair to the Trine community.

Evelyn Piazza and Rae Ann Gruver shared for more than an hour to a mostly silent, sometimes tearful audience about the dangers of hazing, as well as their own experiences.

Rae Ann began by describing her son as “a gentle giant, a sweet soul.”

“He had a big smile and an even bigger hug and he was always someone who took care of the people around him. He was easygoing and super laid back. He laughed with his entire body and he loved every day of his life,” she recalled. “He could talk your ear off about any sport and every single statistic to go with it. He was a Little League coach and he coached his sister’s basketball team.”

Max chose LSU for its journalism program and pledged a fraternity to meet people and to get involved, Rae Ann said. 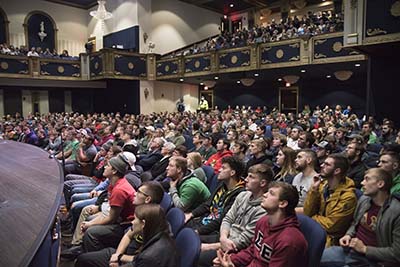 The hazing ritual at the fraternity where Max pledged included having phones confiscated, getting doused in hot sauce and mustard, being placed in a hallway with strobe lights and loud music, and being forced to do wall sits while fraternity brothers walked across their legs, Rae Ann found out later.

“But the big part of the night was ‘Bible study,’ ” she said. “Pledges were placed with their noses and their toes against the wall, and that’s when the questions began. Answer a question wrong about the fraternity or mess up on the Greek alphabet, and you have to take a pull off of a liquor bottle.”

The liquor used was Diesel, 190 proof alcohol not intended to be drunk straight. Some pledges, including Max, were forced to drink for up to 10 seconds from the bottles, even after they were obviously intoxicated. Later reports said Max consumed more than 32 ounces of the alcohol.

He was taken downstairs at the fraternity house and left to sleep the effects off on a couch, despite obvious signs of distress including labored breathing, clammy skin, blue lips and fingers and a weakening pulse.

Max died sometime the next morning. His blood alcohol level registered at .495, more than six times the legal driving limit and well above the level considered life-threatening.

Evelyn described Tim as “shy until he got to know you, and then he was larger than life.”

“He was smart, athletic, loved Netflix and video games, and he kind of had his life figured out,” she said. “He was going to major in mechanical engineering so he could have a career designing prosthetics, go to grad school, eventually marry his high school sweetheart, and just have fun with his brother and friends.”

As part of the hazing at Penn State, Tim also was forced to drink large amounts of alcohol in a short time. He became so intoxicated that fell down the stairs to the basement of his fraternity.

“Once he was hurt and unconscious he was slapped, had beer poured on him, had a sternum rub done to him, had his shoes thrown at his head, was sat on to keep from rolling off the couch, was backpacked [had a backpack full of books placed on him to keep from rolling over and choking] and then basically ignored and left to die because the fraternity did not want to get in trouble,” Evelyn said.

Rae Ann told the audience that hazing can start small with pledges having to wear certain clothes or perform tasks for current members, but can progress quickly.

“You don’t know where a hazing event is going to lead, and you are literally playing Russian roulette with someone’s life,” she said. “It only takes one second, one person to push it all too far. One bad decision and someone could be seriously harmed, psychologically damaged or even dead.”

Evelyn encouraged those in attendance to push to tougher hazing laws, comparable to laws for driving under the influence.

“Somewhere along the line, a judge got tough and started enforcing the law, and then other judges joined,” she said. “Nowadays, you will lose your license, you will get fined, your car will get impounded, you might end up in jail. It is serious business. We need hazing to be that way too.”

She also warned the history of hazing incidents can follow perpetrators for the rest of their lives.

“Google our sons’ names, and you will see the names and pictures of the people that are involved,” she said.

Both mothers described the emptiness that results from losing a child.

“Max’s birthday was Monday, and he should have been 21,” Rae Ann said. “There’s always something that’s coming up and your boys aren’t here with you to be with you. Everything changes in your life without them there.”

In addition to family, the loss impacts friends, classmates, fellow pledges and others, they said.

“Little things can send any one of you into a tailspin,” Evelyn said. “Hearing a song on the radio, hearing his ringtone on someone else’s phone. Going to his favorite restaurant. Playing a board game that he made way more fun than it really was. Or just telling stories and remembering him. The distraction is far reaching, and forever.”

“Max and Tim died because of hazing to join a fraternity. Making this hazing culture change will save lives,” Rae Ann said in conclusion. “We wish you guys so much success in this world. You have so much to look forward to. Stay true to yourself and your values, and please remember to always keep each other safe.”

During a question-and-answer session following their presentation, the mothers said they do not have problems with Greek organizations in general.

“My Greek life was fabulous,” said Rae Ann, who was a member of Alpha Delta Pi at Clemson University. “Some of my best friends to this day are still my ADPi sisters. I know how good Greek life can be and how it’s supposed to be.”

“We see the value,” said Evelyn, who also noted that hazing incidents have occurred in other organizations including athletic teams and marching bands. “We see the benefit when it’s done right, so we’re inserting ourselves into the process to help make things better, to make it what it’s supposed to be.”

At the close, Davila and Schuttler presented Evelyn and Rae Ann with donations from Trine University to the Timothy J Piazza Memorial Foundation and the Max Gruver Foundation.