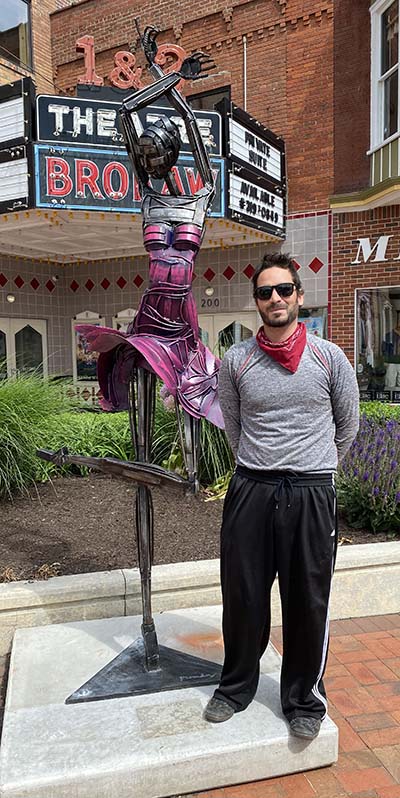 The Humanities Institute at Trine University will host a virtual conversation with Greg Mendez, a sculptor whose works have been part of the Sculptures Angola initiative.

Mendez will speak with artist and Trine professor Sarah Zimmer during “Art: Process and Placemaking,” from 5:30-6:30 p.m. Monday, Oct. 25. Members of the public are invited to join.

A classically trained outdoor sculptor, Mendez has been part of Sculptures Angola since its launch in 2019. Currently, his work, “Resplendent Fervor,” is displayed in the northwest quadrant of the Public Square.

Raised in Decatur, Indiana, where he still resides, Mendez studied at the University of St. Francis School of Creative Arts in Fort Wayne, Indiana, graduating with a B.F.A. in sculpture. His work depicts figures in motion that are classical in form and modern through technique.

His sculptures have been included in many juried public displays throughout the United States from Florida to South Dakota, earning numerous awards. In addition, he works collaboratively with other artists to make art and creativity central to placemaking in Decatur.

To receive the Zoom link for the event, email Jeanette Goddard, director of the Humanities Institute, at goddardj@trine.edu

Photo: Sculptor Greg Mendez stands with his work "Resplendent Fervor," part of the Sculptures Angola initiative. The Humanities Institute at Trine University will host a virtual conversation with Mendez on Monday, Oct. 25.