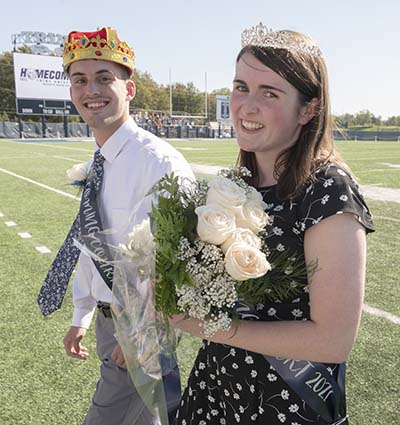 Trine University recognized its 2021 Homecoming court as well as its king and queen during the annual Thunderstruck Pep Rally, held at Zollner Football Stadium on Friday, Oct. 1.

Meghan McGonagle of Frankfort, Illinois, was crowned Homecoming queen. A senior chemical engineering major, McGonagle is involved with the American Institute of Chemical Engineers and Omega Chi Epsilon. She hopes to work as a quality engineer in the pharmaceutical or automotive industry.

Aiden Benysh of Warsaw, Indiana, was named Homecoming king. A senior studying mechanical engineering, Benysh enjoys working out and playing disc golf, and would like to work with space exploration or auto racing.

Other members of the Homecoming court included: