INDIANAPOLIS — Emily Wampler, a Trine University elementary education/special education major from Bloomington, Indiana, was one of 30 students named as “Realizing the Dream” recipients by the Independent Colleges of Indiana (ICI).

Made possible by a grant from Lilly Endowment Inc., the scholarship program annually recognizes first-generation college students from each of ICI’s private, non-profit colleges and universities. Students are selected for the $3,000 award for outstanding achievement during their freshman year as they successfully advance toward completing their bachelor’s degrees.

The program historically honored recipients, their families and influential educators at an annual event. However, due to the current pandemic, organizers created individual videos of each student describing what it means to them to be a first-generation college student and thanking the influential educator they have chosen to honor.

In addition to the students’ scholarship awards, the influential educators also receive $1,000 in professional development grants.

Wampler honored Michelle Klawans, her math teacher at Bloomington High School North. Wampler said Klawans “pushed me to be a better person and student every day” and inspired her to pursue teaching as a career.

Videos can be found at icindiana.org/rtd.

“Thanks to the continued support of Lilly Endowment, we get the opportunity to hear the inspiring stories of these first-generation students and the impact local educators have had on their drive to succeed academically,” ICI President & CEO David W. Wantz said. “Especially during these challenging times, these scholarship awards will provide critical support for these young people who are dreaming of future success.”

About Independent Colleges of Indiana

Independent Colleges of Indiana serves as the collective voice for the state’s 30 private, non-profit colleges and universities. ICI institutions employ over 22,000 Hoosiers and generate a total local economic impact of over $5 billion annually. Students at ICI colleges have Indiana’s highest four-year, on-time graduation rates, and ICI institutions produce 30 percent of Indiana’s bachelor’s degrees while enrolling 20 percent of its undergraduates.

Lilly Endowment Inc. is an Indianapolis-based private philanthropic foundation created in 1937 by J.K. Lilly, Sr. and his sons, Eli and J.K. Jr., through gifts of stock in their pharmaceutical business, Eli Lilly and Company. Although the gifts of stock remain a financial bedrock of the Endowment, it is a separate entity from the company, with a distinct governing board, staff and location. In keeping with the founders’ wishes, the Endowment supports the causes of community development, education and religion. The Endowment funds significant programs throughout the United States, especially in the field of religion. However, it maintains a special commitment to its founders’ hometown, Indianapolis, and home state, Indiana.

Photo: Emily Wampler, a Trine University elementary education/special education major from Bloomington, Indiana, is pictured in a video by the Independent Colleges of Indiana (ICI). Wampler was one of 30 students named as “Realizing the Dream” recipients by the ICI. 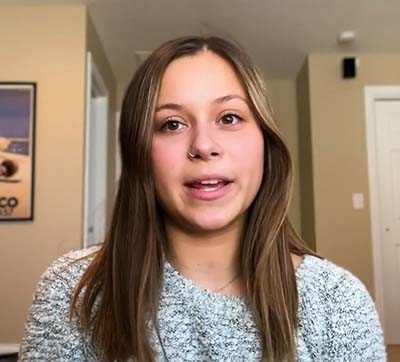