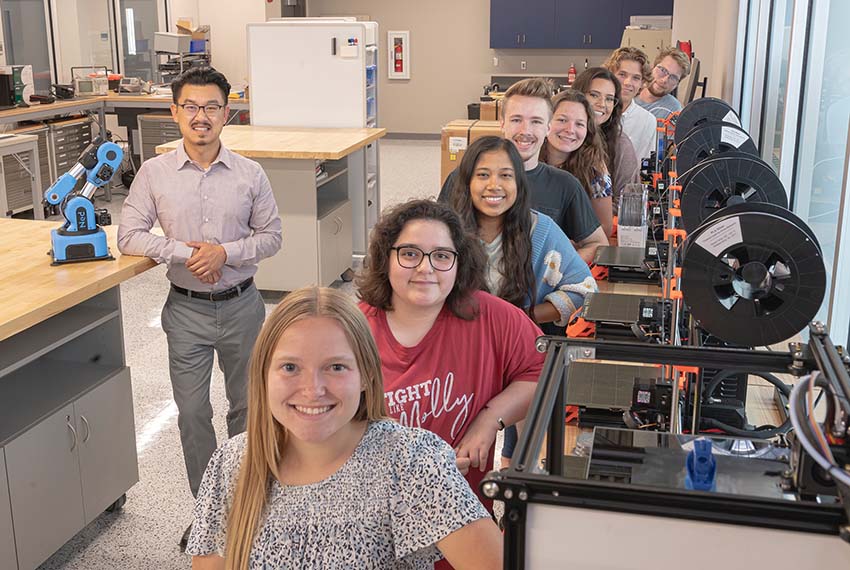 As efforts intensify to increase the number of manned missions into space, Trine University undergraduate students will once again conduct research to help make such missions safer.

The Indiana Space Grant Consortium (INSGC) has awarded nearly $15,000 to the university to fund an undergraduate research project that will design a model to investigate the impact of the harsh environment of space on lymphatic vessels in the immune system.

Using a similar grant last year, Trine students engineered models that mimic blood tissue to assess the impact on those tissues of the increased oxygen required prior to a spacewalk.

Where no one has gone before

Gong said studies have been conducted investigating the effects of oxidative stress caused by space environmental factors — the imbalance between reactive chemicals formed from oxygen and the body’s ability to cope with them that occurs when oxygen is increased or decreased — on organ systems and immune cells. However, there is minimal research into its impacts on structural components of the immune system such as lymphatic vessels.

“To advance our understanding in this area, engineering students at Trine University propose to develop models to investigate the effect of induced oxidative stress on the lymphatic system, and consequently, on the immune system,” he said.

The team will expose models to low- and high-oxygen environments simulating changes in environmental pressure an astronaut may experience during spacewalks and gather data on cell viability and growth as well as secretion of cytokines, substances typically secreted by immune cells. The group also will record data for cultures that include its models along immune cells in the same environment.

Members will compile data to be shared at academic conferences and in research journals.

The Indiana Space Grant Consortium was created in 1991 under NASA’s National Space Grant College and Fellowship Program. The Space Grant national network includes organizations working to expand opportunities for Americans to learn about and participate in NASA’s aeronautics and space projects by supporting and enhancing science and engineering education, research and public outreach efforts.

Photo: Max Gong, Ph.D., left, assistant professor in the Bock Department of Biomedical Engineering at Trine University, will oversee a team of eight students designing a model to investigate the impact of the harsh environment of space on lymphatic vessels in the immune system. From front to back are Amy Apgar, Destany Garcia Ortiz, Upasana Shrestha, CJ Elston, Isabella Didonna, Lilly Speier, Aaron Streit and Aiden Theobald. (Photo by Dean Orewiler)