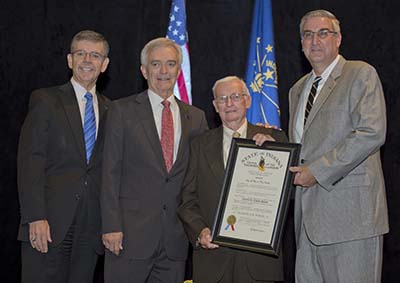 Trine University is mourning the death of longtime friend and supporter Chuck Sheets, who passed away Sunday, Jan. 8, at age 94.

Mr. Sheets established the Harcourt & Elsta Sheets Scholarship at Trine University in memory of his parents and supported the T. Furth Center for Performing Arts, the Humanities Institute and Trine’s general scholarship fund. He also responded to unique opportunities such as contributing top soil for capital projects.

“Chuck is a pillar of Angola and Steuben County, in addition to the generous support he has provided for Trine University,” said Earl D. Brooks II, Ph.D., Trine president. “His character, caring and wise counsel will be greatly missed by many in this community.”

Mr. Sheets had his hand in many of the industrial and cultural developments in Steuben County dating to the 1950s-1960s when he returned to Steuben County following his education at Indiana University.

Among many things, he developed Country Fair Shopping Center and Angola Industrial Park, which is home to many industrial residents along Wohlert Drive.

He was a founding board member of the Steuben County Community Foundation and was instrumental in helping found the YMCA of Steuben County.

Known as a generous philanthropist, Mr. Sheets and his wife, Ruth Ann, who died in 2020, established the Harcourt & Elsta Sheets Scholarship at Trine University and supported the T. Furth Center for Performing Arts, the Humanities Institute and Trine’s general scholarship fund.

In 2016, Lt. Gov. Eric Holcomb awarded Mr. Sheets the Sagamore of the Wabash, the highest civilian honor in Indiana, at Fabiani Theatre on Trine University.