Jontelle Leyson-Smith is helping one of the world’s most well-known companies make sure it represents the diversity of its more than 2.7 billion users. 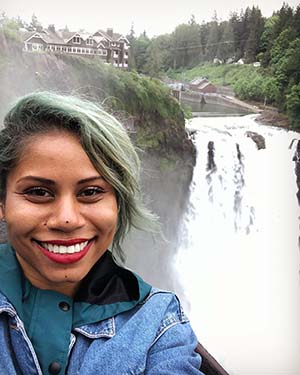 Jontelle is Diversity Program Manager at Facebook. In that role, she is in charge of building, launching and creating programs to support hiring diverse candidates for the company’s many technical positions.

“Facebook values cognitive diversity, including inherent traits — such as gender and race — but also acquired traits—such as military service, socioeconomic background, and education experience,” she said. “Not every employee has to come from an Ivy League school. It’s my job to create equitable hiring processes that are inclusive of candidates who are just as qualified from places like Trine.”

Thanks to her positive work history, Leyson-Smith was offered a full-time position with the Robert Half temp agency in Indianapolis after she graduated from Trine in 2010.

"The communication department at Trine taught me how to research, be persuasive and formulate strong arguments."- Jontelle Leyson-Smith

She headed to Seattle in search of more opportunities and began working at Napster, then worked at Amazon for two years before she joined Facebook.

“Something about high-tech always intrigued me,” she says. “I want to work for companies that are very innovative in how they approach getting work done.”

She began at Facebook as a technical recruiter, where her responsibility was to identify, engage and prepare software engineers to interview for roles at the social media giant. She later moved into the position of diversity-focused recruiter before assuming her current role.

With Trine not well-known on the West Coast or in Silicon Valley industries, she said she has had to work hard to earn the opportunities she has been given.

“The communication department at Trine taught me how to research, be persuasive and formulate strong arguments,” she said. “I also learned to be empathetic and recognize where others are in their journey, and how their experiences impact their view and make them valuable in different ways.”

Many other experiences at Trine also prepared her for her career and life, including being part of Phi Sigma sorority, having her own show on WEAX and serving as a resident assistant, as well as taking classes on persuasion and argumentation.

“Learning how to tailor a message for an audience and achieving a desired outcome is important in any realm,” she said. “It’s always about figuring out what your goals are and what the other party’s are, and coming to a happy medium.”