“He was a design engineer before they were called design engineers,” Melissa commented. “He did hand drafting, and he was a really good artist. He would work with the other engineers. They would be like, ‘We need this,’ and he would draw it.” 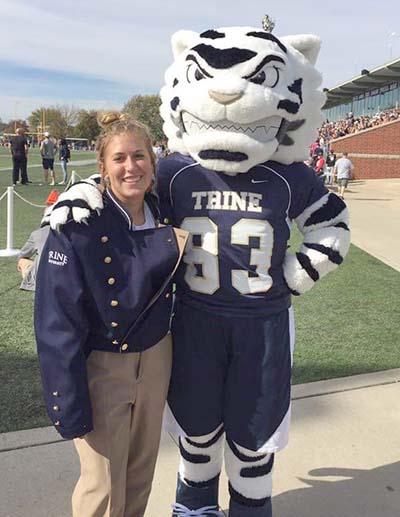 Inspired by her grandfather after seeing his work at NASA Glenn, the 2020 design engineering technology major today works on projects more down to earth, but no less futuristic. She helps design parts for the General Motors’ EV Hummer as well as other vehicles the company may produce in the future.

“I work on small parts in lower structures,” she said, “the flooring and anything below that.”

“It’s cool to think that a part I created could be produced and put on a future vehicle.”

Her journey to her current role brought her to Trine University, which she heard about from high school friends. She was drawn by Trine’s close, personal environment and the friendliness of the faculty.

“I immediately knew Trine was the school I wanted to go to,” she said. “It was the only school I applied to. When I came to Trine, I knew I wasn’t going to be a number.”

"When I came to Trine, I knew I wasn’t going to be a number."- Melissa Wirtz

She began as a mechanical engineering major, but decided she wanted to do something “a little bit more on the artistic side, but still functional.” She changed her major to design engineering technology during her sophomore year.

“The process was really smooth,” she said.

She said being in a major with more male students gave her the opportunity to speak out and stand out. She also made friends with women in other engineering disciplines.

“It was nice to have other girls to keep me motivated and stay on track,” she said.

Prof. Tom Trusty in Trine’s Department of Design Engineering Technology played a key role in Melissa’s career path. He recommended several Trine DET students, including Melissa, to GM, and advocated for them through the interview process.

Melissa got a summer internship with GM, and the company offered her a full-time position at the end of the internship. In addition to getting help from Prof. Trusty, she said her education at Trine equipped her with the skills to succeed in her work.

“Trine definitely gave me all the tools I needed to do my job,” she said. “Through projects and all the other coursework, you get the feel of what it’s going to be like to be in a position, working well with others, learning to communicate, and focusing on the goal of the job - not just the end result, but all the steps to get to the end.”

Allen School of Engineering and Technology