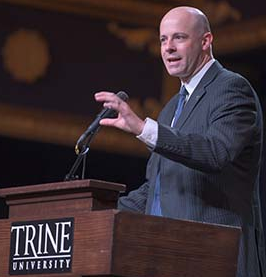 Why do we study sport? At the end of the day, people like to say “it’s just a game” but did you know that the industry is worth $60.5 billion in the United States (Heitner, 2015)? Sometimes I receive funny looks when I tell people that I am a Sport Management professor, apparently they think that I just recreate ESPN’s First Take with my students all day, but there are currently over 400 sport management degree programs offered throughout the U.S. At Trine, our Sport Management alumni have gone on to work in the front office of professional teams, sold tickets to the world’s largest one-day sporting event, and even started their own NBA G-League team. PricewaterhouseCoopers (2019) projects the sports market across North America to grow at a compound annual rate of 3.2% across media rights, gate revenues, sponsorships, and merchandising so the industry is in need of business-ready graduates with the skills to make an immediate impact. So, why do we study sport? Woods (2016) presents five reasons and I will elaborate on each one:

Sport is big business and its financial and cultural impact in the U.S. and worldwide deserves our attention. While most sport management graduates will not go on to own a professional team or work as a general manager, there is still an opportunity to make a considerable impact at all levels of sport. We need good coaches at the youth level to teach proper techniques and principles such as hard work, sportsmanship, and teamwork. We need ethical leaders throughout sport to usher in positive social change. And finally, we all need sport to be that refuge where we can come together and cheer for our favorite team and build the social camaraderie that seems to be missing in today’s world.

PricewaterhouseCoopers. (2019). Outlook for the sports market in North America through 2023. PwC. https://www.pwc.com/us/en/industries/tmt/library/sports-outlook-north-america.html.

Brandon Podgorski is an Assistant Professor of Sport Management at Trine University and the Director of the Trine Center for Sports Studies.